At the research group of Prof. Chihaya Adachi (Kyushu University, Center for Organic Photonics and Electronics Research (OPERA), Center Director; International Institute for Carbon-Neutral Energy Research (I2CNER), Principle Investigator), Asst. Prof. Hajime Nakanotani (Institute of Systems, Information Technologies, and Nanotechnologies, Researcher, at the time of the experiments), et al., an internal quantum efficiency (ηint(※1)) of nearly 100％ was achieved in an organic light-emitting diode (OLED) using traditional fluorescent molecules as the light emitter. By including a molecule exhibiting thermally-activated delayed fluorescence (TADF(※２)) as an assistant dopant in the light-emitting layer of an OLED containing a traditional fluorescent emitter, the efficiency of electrically-driven light emission from the fluorescent molecule could be increased to near the maximum of 100%. The general device architecture developed here offers a simple and robust method for boosting the efficiency obtained from traditional fluorescent emitters past the theoretical barrier of 25% to near 100% while also exhibiting the high operational stability of fluorescent materials. Using this architecture, ηint of nearly 100% can now be achieved with a wide variety of previously developed fluorescent molecules.

These results will be published in Nature Communications, an online sister-journal of the internationally-recognized journal Nature, on Friday, May 30, 2014, at 18:00 (Japan Standard Time).

Propelled by pioneering work in the late 1980s (Ref. 1), organic light-emitting diodes (OLEDs) using fluorescent molecules to emit light through the radiative decay of singlet states (S1) have currently reached commercial application in displays and lighting through the development of a wide variety of materials. Although devices using fluorescent emitters generally have longer operational lifetimes compared to devices using phosphorescent emitters, fluorescence-based devices suffer from a theoretical maximum internal quantum efficiency (ηint) of 25%; thus, improving ηint has long been a goal of OLED research. Under the Funding Program for World-Leading Innovative R&D on Science and Technology (FIRST Program), OPERA has tackled this challenge and recently achieved highly-efficient OLEDs through the development of a third-generation of light-emitting materials, termed “hyperfluorescent,” that exploit thermally-activated delayed fluorescence (TADF) (Refs. 2 & 3).

In the present research, a new way to utilize TADF technology, which allows for the up-conversion of triplets to singlets, and achieve an ηint of nearly 100% was developed by incorporating TADF molecules as assistant dopants in a light-emitting layer that uses traditional fluorescent molecules for light emission. After formation of excitons primarily on the TADF molecules, triplet (T1) excitons can be converted into singlet excitons so that all of the exciton energy is transferred to the fluorescent molecules as singlet excitons, leading to highly-efficient emission. Moreover, the operational lifetimes of the devices using this approach were found to be remarkably improved because the molecule that emits the light is a fluorescent emitter with high electrochemical stability. Thus, through the use of an appropriate TADF assistant dopant, this newly developed device architecture offers a general and robust method to improve efficiency while allowing the selection of the emitter from a wide range of existing fluorescent molecules, which benefit from broad freedom in molecular design. These research results show that both high efficiency and long operational lifetime can be mutually achieved by using fluorescent emitters, which avoids the need for an emitter containing a rare metal and should simultaneously accelerate the adoption of TADF materials in practical applications.

A major challenge to the further commercialization of OLEDs is the increasing of operational lifetime. While the approach used here demonstrates that high efficiency can be compatible with long lifetime, in-depth analysis of physical properties and further development of the theory of organic semiconductor device physics from an academic standpoint is necessary and ongoing to achieve new devices such as solid-state organic semiconductor lasers. These goals are being pursued under the JST-ERATO ADACHI Molecular Exciton Engineering Project, which began in April of this year. Moreover, the integrated development of TADF materials, devices and processing will be performed in collaboration with organizations such as i3-OPERA(※4) to further accelerate the realization of a series of TADF materials for primary-color (RGB) emission and white OLEDs exhibiting high efficiency and long lifetime. 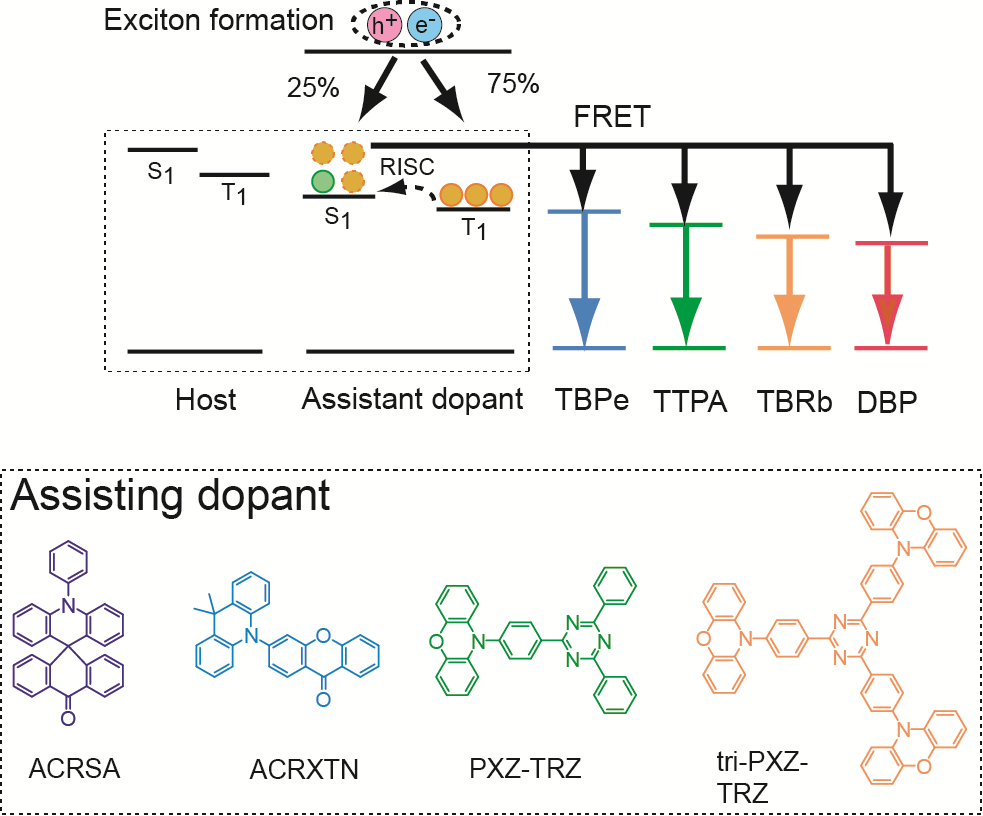 Fig. 1. New mechanism for the emission of light from fluorescent molecules via a TADF assistant dopant 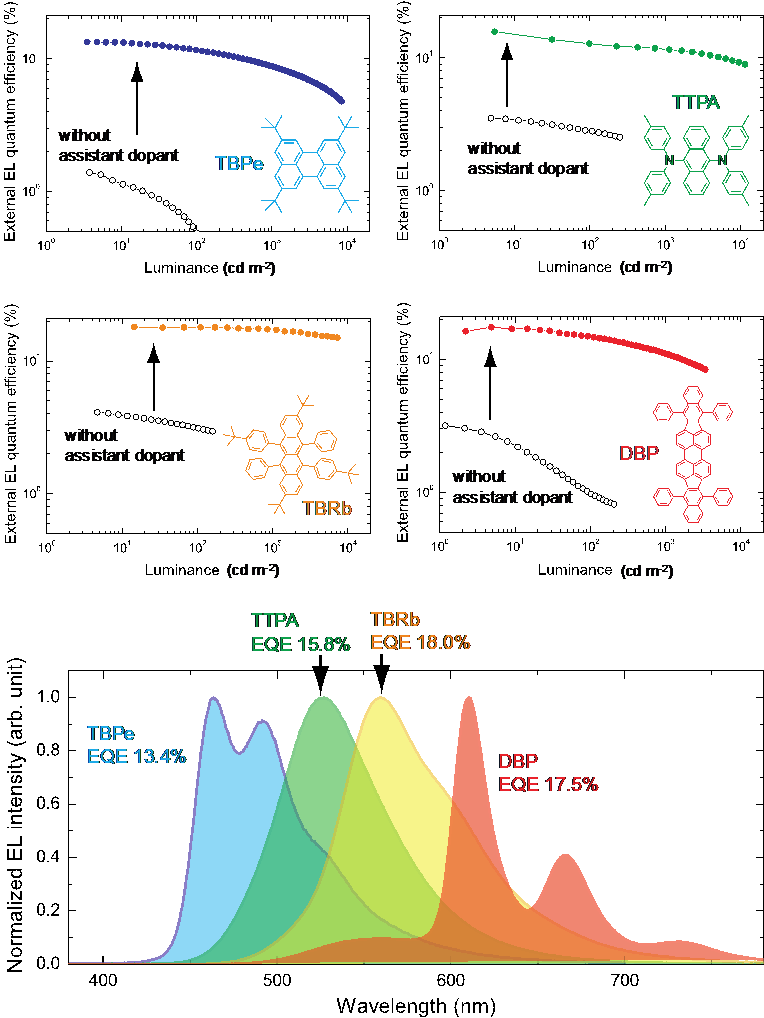 Fig. 2. Efficiency characteristics and electroluminescent spectra of the OLEDs proposed in this work

The internal quantum efficiency is the fraction of electron and hole pairs injected into a device that are converted into photons inside the device, while the external quantum efficiency is the fraction converted into photons and subsequently emitted from the front face of the device. Thus, the ηext is the product of ηint and the light-out-coupling efficiency (ηp), as shown below.

Depending on the spin multiplicity, an exciton on an organic molecule can exist in a singlet or triplet spin state, and spin statistics states that 25% of the excitons formed upon the recombination of electrically injected electrons and holes will be in the singlet state while 75% will be in the triplet state. In TADF, excitons in the triplet state are first up-converted into a singlet state by absorbing thermal energy and then subsequently produce fluorescence through radiative decay from the singlet state. Because the emission produced from triplet excitons through this pathway generally has a long lifetime, the emission is called delayed fluorescence. In this research, highly-efficient OLEDs with emission originating from traditional fluorescent molecules were created by using TADF molecules as an assistant dopant.

Generally, the light-emitting layer of an OLED consists of a host and a single dopant that emits light. By adding hyperfluorescent materials, which are a new class of organic light-emitting materials developed under this project, as an additional dopant (i.e., assistant dopant) in the emissive layer, all of the excitons formed under electrical excitation can be converted and transferred to the light-emitting dopant as singlets, thus realizing highly-efficient electroluminescence from traditional fluorescent emitters.

To accelerate the practical application of the cutting-edge OLED materials being created at the research facilities in northern Kyushu based around the Center for Organic Photonics and Electronics Research (OPERA) at Kyushu University, i3-OPERA (5-14 Kyudai Shinmachi, Nishi-ku, Fukuoka) was established by the Fukuoka Industry Science Technology Foundation and serves as a technology transfer hub by performing, in collaboration with industry, the evaluation, analysis and optimization of devices and structures incorporating these new materials with the goal of realizing their application in mass-produced displays and lighting. Based on contract and cooperative research with businesses, the center will advance the development of practical applications for TADF technology in collaboration with OPERA.