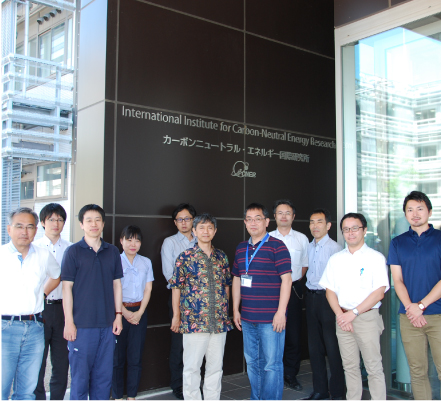 Research Center of Next Generation Refrigerant Properties. We will briefly introduce NEXTRP and what it is currently doing.
NEXT-RP was established in I²CNER in April 2016, four years ago. At the starting time, our laboratory was an empty room, but after about 4 years, we have set most of the experimental facilities. NEXT-RP is carrying out the evaluation of thermodynamic properties, heat transfer characteristics, and refrigeration and heat pump cycle performance for new refrigerants and their blends. Especially, nowadays, the development of next-generation refrigerants has attracted a great deal of attention all over the world in order to prevent the global warming. We believe that NEXT-RP is suitable for the mission of “carbon neutral”.
Moreover, instead of doing all the work at only one place in Kyushu University, we are collaborating with universities and national research institute in Japan and around the world to make timely solutions. We explain the next-generation refrigerant a little more specifically. In the 1930s, CFCs (chlorofluorocarbons) and HCFCs (hydrochlorofluorocarbons) caused the big revolution for the refrigeration and air conditionings. As a result, refrigerators, air conditioners, and heat pumps have become widespread widely. But in the 1970s and 1980s, CFC changed from valuable working fluids to a global criminal. The cause is an Ozone depletion problem.
Since then, the development of CFC alternatives has progressed, and HFCs (hydrofluorocarbons) has emerged as a savior to help the earth. The feature of HFCs is that it does not contain chlorine atoms, which is the cause of ozone layer depletion.
From the 1990s to 2000s, it was thought that HFCs and their blends became popular as an environmentally acceptable refrigerants. However, another global environmental issue has become a hot topic unfortunately. It’s a global warming issues. It is found that HFCs has a great impact on global warming, and then, it becomes necessary to develop the HFC alternatives. Now, we are tackling to find out the next generation refrigerants. 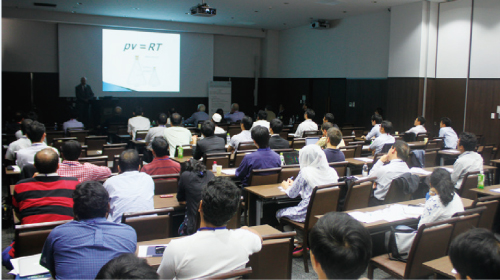 Six months after its inauguration, NEXT-RP held its kickoff symposium at I²CNER on October 7, 2016. The large crowd of participants included numerous representatives from partner organizations and businesses, including refrigerant / air conditioning manufacturers. In an effort to further promote I²CNER’s broad-ranging research efforts, a lab tour for keynote speakers of the symposium was also hosted.

Lab Tour: A sample of the laboratories that were visited

Though refrigerants are vitally important to our daily lives and various industries, most people are not very familiar with them. They are essential to all refrigeration and air conditioning. The chlorofluorocarbon (CFC) alternatives currently being used as refrigerants have a large global warming potential (GWP), which has led to concerns about their sustainability. Due to the fact that the development of sustainable, new generation refrigerants has been identified as an urgent task, the Research Center for Next Generation Refrigerant Properties (NEXT-RP) was established on April 1, 2016 as an internal organization of I²CNER. Key members of this center got together to discuss various topics, ranging from the background of the center’s establishment to future perspectives.

Aiming to Create a National Hub of Research on New Refrigerants

Expectations for Research Institute on Refrigerants Founded in Japan

Aiming to Be the World’s Leading Research Institute on Refrigerants